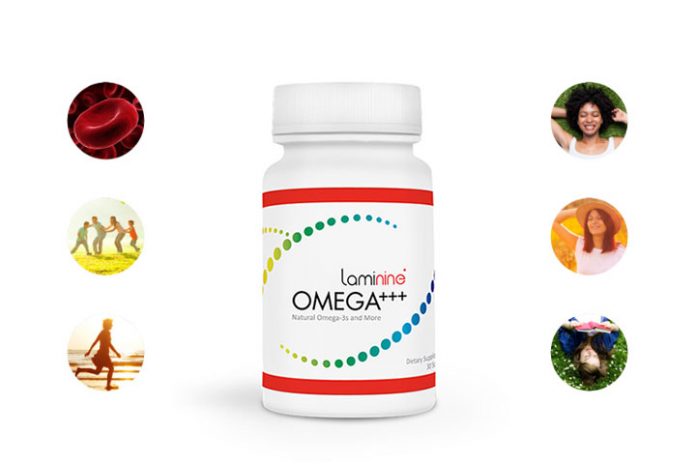 Laminine Omega fatty acids come from Peruvian Anchoveta, sourced from the “Humboldt Current,” off the coast of South America. Fatty acids from this type of fish have the highest naturally-occurring ratios of EPA and DHA of any species.

Omega-9 fatty acids have been shown to increase HDL cholesterol and lower LDL cholesterol, they help eliminate plaque build-up in the arteries”, according to the University of Colorado, Colorado Springs

Borage leaves are traditionally known to treat skin disorders including eczema & dermatitis. It is also used for other purposes such as rheumatoid arthritis, stress, PMS, diabetes, pain, and swelling. However, its primary use for Laminine OMEGA is its oil that also contains these fatty acids.

Laminine OMEGA uses CoQ10-ER (Extended-Release for 24-hours). Coenzyme Q10, also known as ubiquinone, ubidecarenone, coenzyme Q, and abbreviated at times to CoQ10 /ˌkoʊ ˌkjuː ˈtɛn/, CoQ, or Q10 is a coenzyme that is ubiquitous in the bodies of most animals.

This oil-soluble vitamin-like substance is present in our body. It comes from fish & red meat. However, if you fail to eat the right food that contains this enzyme, you need it as a supplement. It is a powerful antioxidant that reacts to the bloodstream. It fights oxidative stress in the blood vessels and arteries and may help in maintaining normal blood pressure.

There are 2 basic types of Vitamin K – K1 and K2 and Laminine Omega have the K2 Vitamin. It comes from a form of food bacteria and MK-4 and MK-7 are the two most significant forms of K2. Laminine OMEGA contains the MK-7 which is recognized as the most nutritious chain.

Unlike K1, Vitamin K2 does not come from plants but from food bacteria. Natto produces this type of bacteria known as Bacillus subtilis. Natto is made from fermented soybeans, traditionally eaten at breakfast. It is known in Japan to provide to ward of cancer, promote strong bones, and prevent senility. Natto is a powerhouse source of K vitamins, particularly K2 that is rare from other foods.

Found in Laminine (Original), this egg extract from a 9-day old avian egg stimulates stem cells allowing each of the other ingredients in Laminine OMEGA Plus to perform their function effectively.

This ingredient comes in powdered form also known as PESE or photo embryonic stage extract which was first discovered by Dr. John Ralston Davidson, a Canadian doctor who was looking for a cancer cure. He theorized that the nutrition found on exactly the ninth day of an egg contains micronutrients that can help the body heal itself. The research died with him.

Laminine OMEGA Ingredients on the label