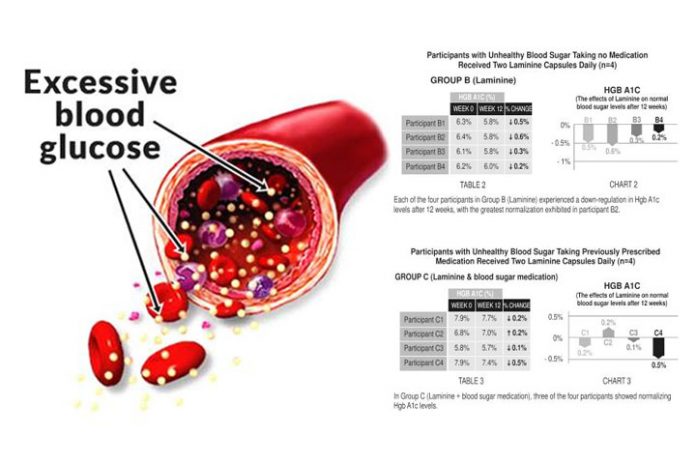 A pilot study for Laminine was conducted for patients beginning to experience unhealthy blood sugar levels or prediabetic stage. Subjects Hgb A1c were assessed at the beginning of the study and after 12 weeks of taking two supplements daily.

What does it mean for a prediabetic?

Glucose tolerance breaks down when metabolism begins to be inefficient. Sedentary lifestyles that result in an overweight usually indicate higher than normal glucose levels, though not classified as diabetic or, in some cases, prediabetic.

Although the sample size was not significantly huge, the research shows a difference between glucose levels before and after 12 weeks of supplementation with Laminine.

The difference in the Hgb A1c marker measurements before and after supplementation (a change of 0.475 units) was also statistically significant in Group B, adding additional credence of the noted effect.

Thus, taking Laminine may provide healthy maintenance of normal blood glucose. This is a critical study, particularly to those getting older and at risk of developing high blood glucose.

Although the result is promising, a much larger sample is needed to substantiate the claim.

The Fertilized Avian Egg Extract (FAEE) in Laminine is the highest and purest form of young tissue extract or YTE. It is not denatured with heat, thus retaining the Fibroblast Growth Factor (FGF) that triggers stem cells in the body.

It may affect glucose tolerance when added to the diet continuously. However, Laminine is not intended as a replacement for conditions that may require proper medicine.